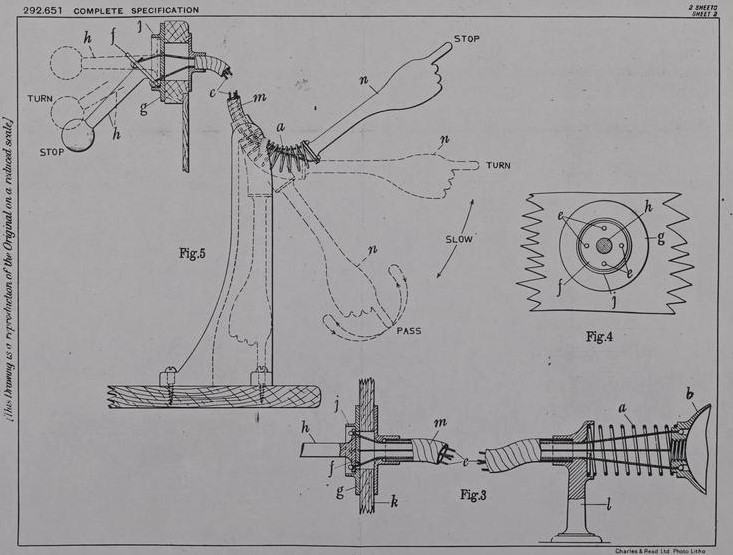 It’s British Science Week from 9-18 March and this year’s theme is ‘exploration and discovery’, encouraging young people to think about everyday discoveries and how they affect their lives by exploring science in the world all around us.

Frederick Lanchester was a prolific inventor, having over 200 patents granted for all sorts of inventions which can be found online in the catalogue.

There are so many patents that we try to feature a Lanchester Patent of the Day on Twitter and our Facebook page and this week there is a bumper crop of amazing inventions. On Monday it was an amazing indicator from 11th March 1927 from Fred’s brother George which started the week, followed on Tuesday by an extraordinary electromagentic clutch from 1933.

On Wednesday, it’s way back to 14th March 1896 for a way of controlling steering and gearing on the very earliest cars.

Thursday’s patent is from exactly 120 years ago on 15th March 1898, describing how a ‘vortex wheel’ could vary speed and transmission for a motor vehicle.

Finally Friday’s invention features Fred’s musical passion which (as well as proposing a new mathematical version of  the musical scale) led him to produce this patent on 18th March 1919 on for improvments to upright pianos.

All of these patents and hundreds more are available to explore in the catalogue as well as the unique pages from Fred’s notebooks and sketchbooks, correspondence (including a letter from Wilbur Wright discussing his ideas on powered flight) and much, much more. The Outreach team are also available to bring workshops and talks out to schools and other community organsiations.  In the coming weeks we will be at Whitmore Park Primary School, Coundon Court School, and Aylesford School.

So if you’d like to find out more, have a look at our leaflet and see what we can do for you.  Then contact Paul or Alex to discuss your needs further at outreach@lanchesterinteractive.org or on 02477 657882.

We look forward to more exploration and discovery with Fred Lanchester and the archive during British Science Week and beyond!