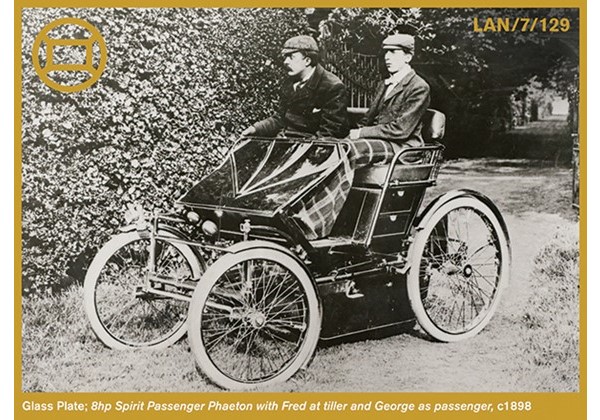 Fred was born to the architect Henry Jones Lanchester and Octavia, a teacher of mathematics and Latin in 1868.  He was one of nine siblings, eight who survived into adulthood, the twin of his younger brother Frank dying shortly after he was born.

Frank and his younger brother George (see in the car above, next to Fred) were to work closely together with Fred, forming the “Unholy Trinity” thanks to their habit of working on Sundays building and developing cars and other machines.

Frank was a successful salesmen, going on to become a founder member of the Society of Motor Manufacturers and a friend to King George VI, showing him round Coventry during his trip in 1938.

Their elder brother Henry was also an architect, building magnificent palaces and motor houses in India for the maharajas as well as many prestigious buildings in Britain.

Their sister Edith (Biddy) Lanchester was a prominent suffragette and her daughter Elsa Lanchester became a Hollywood actress, playing ‘ The Bride of Frankstein’.

All in all, a tremendously talented and remarkable family!