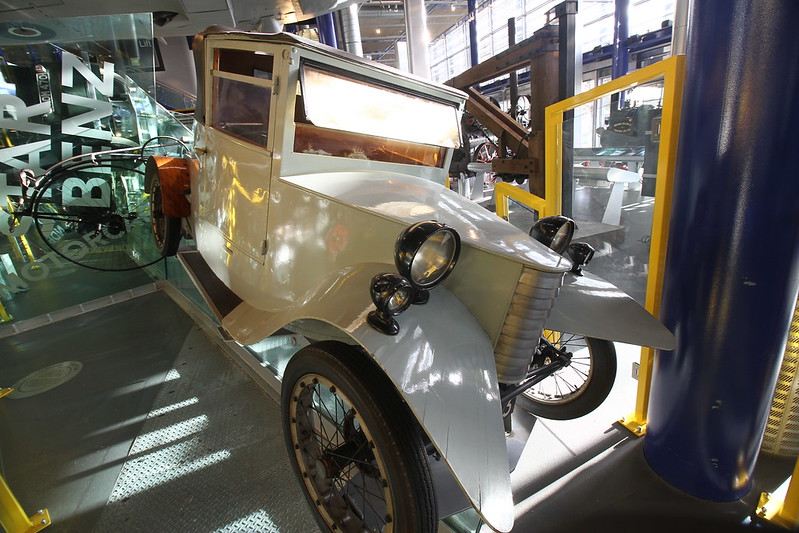 And a mere 103 years since his ‘Petrelect’ powered protoype car was being tested on the streets of Birmingham and Warwickshire! LAN-6-105-1 Patent for improvements relating to the propulsion of vehicles by combustion of prime mover and electrical storage, 08 August 1910

But to tell the story of Fred’s hybrid foresight we must go back to that original patent from 1910 where he describes so elegantly and succinctly how his petrol-electric hybrid system would work. In exactly the same way that cars like today’s Toyota Prius perform he envisaged an electic motor connected to a petrol engine and battery in such a way that stored electrical energy could be used to power the vehicle until the petrol engine kicked in.  At this point the motor would revert to being a dynamo and start to charge up the battery. In his words:

According to this method the dynamo will automatically take up any excess torque when the engine happens, by reason of gradient or otherwise, to be “above its work” and convert the surplus energy and transfer same to a storage battery. Conversely when the motor torque is insufficient the dynamo becomes a motor and reconverts the electrical energy into mechanical work the battery beind discharged all the while. However his first application for this idea wasn’t for a car, but for a bus developed for Daimler in 1909. The K.P.L. Omnibus was redesigned by Fred to adhere to new rules set by the Metropolitan Police who controlled details of London buses at the time.  His design combined the chassis and body (known as a monocoque) made of steel with aluminium panelling. Only twelve of these ground-breaking buses were made when the contract was cancelled and a new, more lucrative contract for thousands of conventional Daimler engines to supply the London General Omnibus Company was put in place.

This wasn’t the end for hybrid power though, and there is a hint in the 1910 patent as to where the next ‘Petrelect’ system might be found. In 1911 Daimler asked Fred, in his role as a consultant, to draw up plans for an experimental railcar using this technology. Two 105 hp Daimler engines would provide the combustion power, each with their own dynamotor. If either or both the petrol engines failed, the railcar could still get continue its journey on electrical power. Outbreak of the first World War slowed progress and the prototype was delivered to the Coventry Daimler factory in 1913 before testing started and quickly halted in 1914. Tests in conjunction with the London North Western Railway (LNWR) on a route from the Daimler Halt through Nuneaton, Rugby, Northampton via Market Harborough and returning via Rugby, Leamington, Kenilworth and Coventry resumed in 1918. However LNWR lost interest in the project in 1920 and the railcar was left in the works siding until it was abandoned altogether in 1921. In 1924 Fred’s thoughts turned to cars and living next door to his brother George provided the perfect opportunity to join forces and come up with a cheap, simple lightweight two-seater which they began to build in George’s garden!

The Mark I was a three-wheeler with a BSA motorbike engine and morphed into a four-wheeled car by version two, with wooden bodywork and wheels that were made by a boatbuilder in Cowes. Even the suspension was made of spruce and through the MkIII version, Fred managed to cover over 10,000 miles. George felt it was ready for production, but Fred was in the pursuit of perfection and he could always see ways of improving the design. George left the partnership and Fred carried on alone and he decided that his ‘Petrelect’ hybrid system would power the ‘wooden car’ from now on.

By the time the Mk VII was on the drawing board in 1926, the likes of the Austin 7 had cornered the market for cheap motoring for the masses, and Fred’s design was increasing in weight and complexity. By the time the Mk VII was built in 1927 his ‘Petrelect’ system was almost perfected but the syndicate he had formed to try and produce the car had already been wound up and Fred was again going it alone with his own money. His plans for a Mk VIII and Mk IX remained just that, plans in his sketchbooks, but he predicted the Mk VIII engine (which was built and is held by the Thinktank museum along with the Mk VII prototype car) would happily have run at 50mph at 45mpg, impressive even for today’s vehicles. So we come full circle and today’s UK Government’s decision to ban the sales of petrol and diesel cars from 2030. Some hybrid cars are exempt and so Fred’s design might have snuck in….by 103 years! Almost certainly the tipping point for electric cars will come before this legislation comes into force – Honda have already sold their last diesel cars in the UK – even the BSA brand is being resurrected as an electric motorcycle company, but we can’t help think what might have been, had we been driving around in Lanchester hybrid cars for the last 90 years. However we can still enjoy the genius behind this unique protoype.