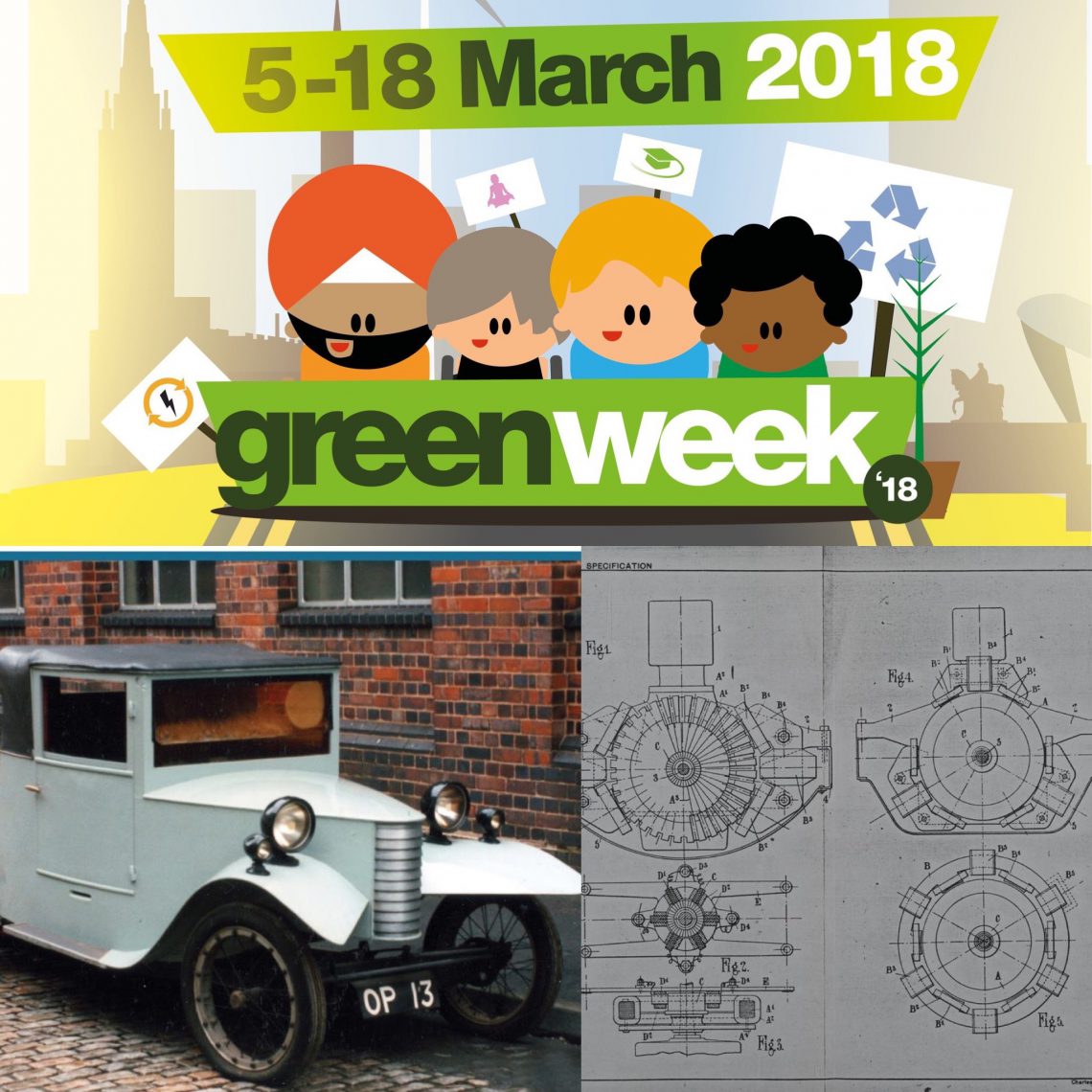 This week (5th – 18th March) Coventry University goes Green with events about sustainability all across the city. With our partner organisations we’ll be running workshops, drop-ins and free sessions trying to get everyone thinking about the environment and healthy living. For the latest information check out the GreenWeek18 hashtag on Twitter, or visit the Green Week blog.

You might wonder what can an Edwardian engineer tell us about sustainability? But recent moves towards hybrid car technology owe a lot to Fred Lanchester.

As early as 1910 Fred was thinking about how hybrid petrol/electric systems could work in cars. In his Presidential Address to the Institution of Automobile Engineers Fred discussed how a hybrid petrol/electric engine could be used to address the deficiencies of a sliding gear box. This stemmed from the work he did on the KPL bus built by Daimler which, like a lot of Fred’s work, was ahead of its time.

In May 1915 Fred and a Daimler engineer named John Milligan filed a patent for a hybrid system, which can be viewed online here. The patent describes how the car can be driven by an internal combustion during ‘normal’ driving but “…by disengaging the clutch intermediate electrical transmission may be brought into action, for the purpose of driving the car at lower speeds, and also for preliminary transmission of power when accquiring speed…” In many ways this is similar to the way a hybrid car, like the Toyota Prius, uses its battery at lower speeds for more efficient driving under 15mph. The infographic below (the original can be found on the AutoMD website) explains in more detail how hyrbid cars utilise the power of electric and internal combustion to make an efficient and greener car.

Fred wouldn’t experiment with petrol-electric hybrid technology again until the 1920s when in the design of his Mark IV to VIII cars. As is often the case with Fred his strive for perfection in all areas frustrated others, his brother George saying “How often does the genius contrive to improve and develop his design until the original conception is lost.” George wanted to focus on producing Fred’s Mark III design and selling what was a cheap, lightweight wooden car that could prove successful in the mass market. Fred, however, began to develop what he called the ‘Petrelect’ system.

In 1924 Fred took a patent out for the final ‘Petrelect’ system which can be viewed online in our archive. Over the next few years Fred continued to work on the Petelect system, resulting in the Mark VII prototype which is on display at the Thinktank in Birmingham. The car was ahead of its time and innovative in its own way, developed by Fred in his spare time after the Daimler chairman lost interest in the project. The design was taking a lot of time and money but was a passion project for the perfectionist Fred.

A lot of Fred’s work on the Petrelect care can be found in Sketchbooks 4 and 5 in the online archive. Quite why Fred’s hybrid car never went into production is something of a mystery. He was a perfectionist and was constantly trying to improve the models and prototypes, never fully happy with the results of his work. Also money and boardroom politics at Daimler were a key issue. In 1925 Daimler and Fred set up Lanchester Laboratories Ltd. which was intended to be a ‘research and development’ subsidiary for Daimler but the money never quite came through for Fred, halting the cash flow for the Petrelect car. Furthermore Fred clashed with Daimler management who were tyring to save money in a torrid economic climate. It would also seem that in the late 1920s other ventures took precedence including the armoured cars and speakers that Lanchester Laboratories focused on.

To find out how Fred’s prototype Petrelect system worked, download our free AR app (through the Google or Apple store) and use your smartphone or tablet to bring the image below to life. Click on the buttons on your touchscreen to see how the relationship between the motor, engine and dynamo worked in different driving conditions. It would take 80 years for hyrbid cars to become a mass-market feature with the development of the Toyota Prius. By then there was an urgency in developing this technology due to the realisation that the internal combustion engine was contirbuting to climate change. You can’t help but think, however, would things have been different if Fred’s Petrelect system had taken off in the 1920s?