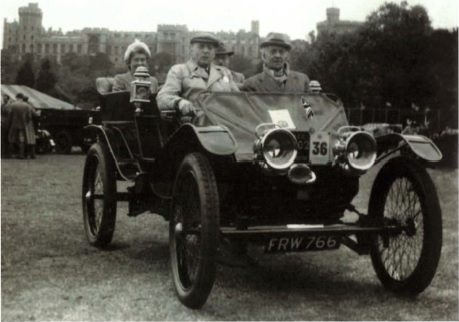 Alongside his brothers Fred and George, Frank (christened Francis and one of a pair of twins with Charles, who sadly only survived a few days) formed the “Unholy Trinity” who revolutionised motorised transport in Britain.

Born in Hove on the 22nd July 1870 he was to become one of the leading lights in the emerging British automotive industry with royal friends and contacts across the world. But they began on their bikes with Frank and George being members of the Speedwell Bicycle Club based in Birmingham. By 1898, Frank was the club’s captain and he won a prize for coming second in a 25 mile handicap race. Fred set up a factory making a redesigned bicycle hub in St Pauls Square Birmingham and asked Frank to give up his bank job to come and run the business as general manager. He had a flair for sales and joined Fred and George at the Forward Gas Engine Company where his commission often surpassed his 30 shillings a week salary. The brothers were only free to experiment on their boats and engines on Sundays and so the residents of St Bernards Road Olton named them “The Unholy Trinity” for working on the sabbath.

Frank helped Fred to set up the Lanchester Engine Company in 1899 and became company secretary, his warmth and negotiation skills no doubt assisting the flotation. He was also responsible for sales and marketing and did all he could to help promote the company.  In 1900 he was elected a member of the Automobile Club (now the RAC), was a founder member of the Society for Motor Manufacturers and Traders (SMMT) and helped found the Midland Car Club, famous for the Shelsley Hill Climb.

When the Army took an interest in motorised vehicles he became a member of the Motor Volunteer Corps, where owners put their vehicles at the disposal of the Army for training exercises.

Despite making a profit in 1903, the company went into voluntary liquidation in 1904 but was reorganised and was making a profit again within a few months as the Lanchester Motor Company. Frank became chief of sales and opened depots and showrooms in Manchester and London. He even found time to patent a revolving fireplace in 1918!

As president of the SMMT he welcomed King George V and Queen Mary to the Olympia Motor Show and of course showed off the latest Lanchester cars.  The interior didn’t impress the King through who said:

Very fine Mr Lanchester, but more suited to a prostitute than a prince don’t you think? That fortunately didn’t diminish the Royal connection as in 1938 Frank was chosen to welcome his son George VI at Tile Hill station in Coventry to show the monarch around the shadow factories preparing for war. He had known the King for many years as he had bought several personal Lanchesters. George VI purchased three more when he was crowned in 1936 for personal and state use.

After the takeover of the Lanchester Motor Company by BSA in 1931, Frank joined the board of Stratton-Instone Limited, sales agents to Daimler, BSA and Lanchester and in 1936 Frank set off on a tour of India and Ceylon (Sri Lanka) to promote sales and visit the Indian princes who loved  the finest automobiles.  Lanchesters were particularly popular with Prince Ranjitsinhji, the Jam Sahib of Nawanagar, best known as the Ranji the cricketer.  The Prince displayed his collection of over 20 Lanchester cars in honour of Frank’s visit, each with their own chauffeur and space in a motor house designed by Henry Lanchester, another brother!

From 1936 onwards he remained a director of the Lanchester Motor Company and sales consultant splitting his time between the Midlands and the RAC Club in Pall Mall where he was in great demand as an after dinner speaker. Even in his eighties he didn’t hold back when driving and on delivering his grandson’s Lanchester Eleven for repairs he wrote:

You must firmly tell your car to behave like a Lanchester, ie be quick off the mark, and not to behave extravagantly and above all wear well or else it will get the sack!

When he died aged 90 in Leamington Spa, the Queen Mother ordered her Comptroller at Clarence House to write to his widow Minnie.

Dear Mrs Lanchester,
Queen Elizabeth The Queen Mother has just learned of the death of your husband, and Her Majesty commands me to write to send you and your family a message of her deep sympathy in your great loss.

So on what would have been his 150th birthday, we think of Frank Lanchester who contributed so much to the Lanchester brothers’ success – see what he thought about it all on this article he wrote for Motor Industry in 1952.

(Background information about Frank from The Lanchester Legacy Vol3.)