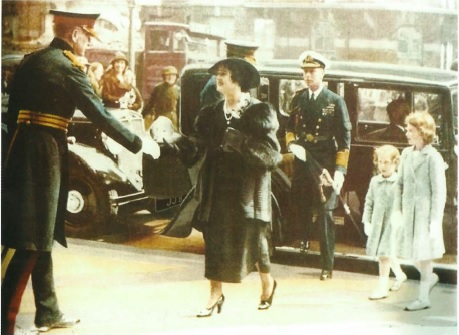 On the occasion of her platinum wedding anniversary, it seems a fitting tribute to look back at Her Majesty’s connections with the famous royal car company founded by Fred Lanchester and his brothers.

Her father, the Duke of York (later King George VI) was a huge admirer of Lanchester cars and in 1936 ordered a new limousine and a landaulet for personal and royal duties. Their registration plates were JJ4 and JJ5 and in the picture above from the Lanchester Legacy Vol 2, Princesses Elizabeth and Margaret can be seen getting out of JJ4.

When the Duke of York became king in 1937, many of his less official visits were made in his personal Lanchester Straight-8s, often taking over from his chauffer and driving himself. Sadly JJ4 and JJ5 were turned into hearses when they were no longer used for royal duties, protecting their identities from future owners. But Lanchesters were given the seal of approval and built ‘by Royal Appointment’ for King George VI.

It was indeed a Lanchester Eighteen saloon, but her connection with Lanchesters did not stop there, with a purchase made in November 1952 of a Lanchester Fourteen, originally in black, for her own personal use. Originally in black, this Lanchester Fourteen was bought new by Queen Elizabeth II in November 1952 – Reproduced from the Lanchester Legacy Vol 2