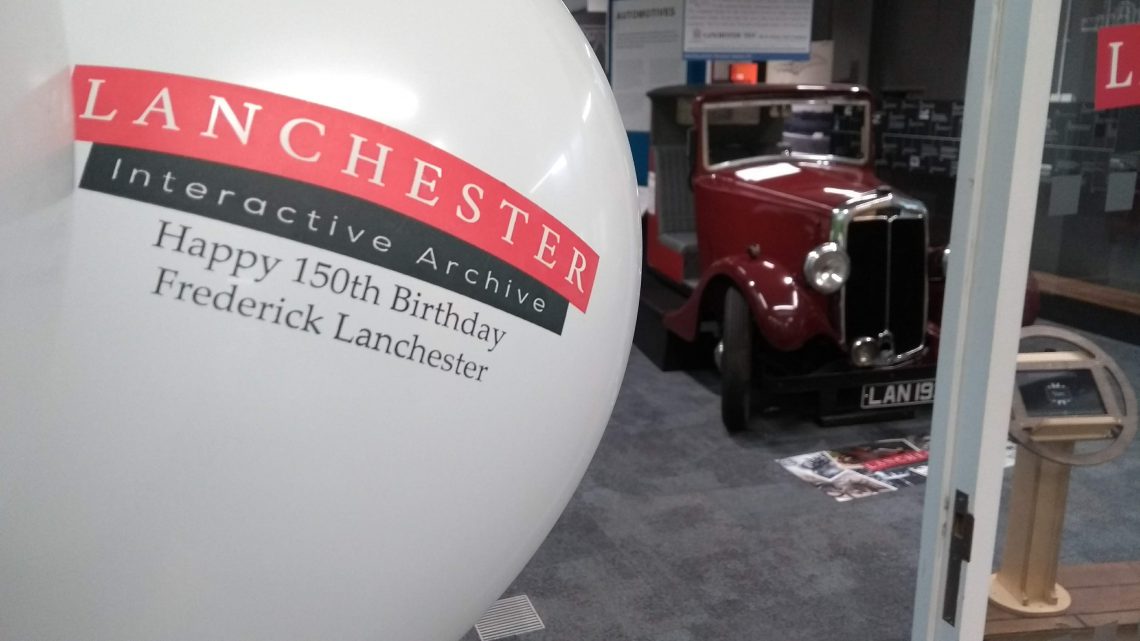 On October 23rd 1868, Fred Lanchester was born to Octavia and Henry in Lewisham, beginning a lifetime of innovation and invention which still reverberates around the institution that maintains such strong links with the Lanchester name.

So today in Coventry University’s Lanchester Library we celebrated what would have been his 150th birthday with cakes, balloons and a heartfelt thanks for his remarkable acheivements which have stood the test of time and paved the way for future innovations.

From the first of over 200 patents in 1888 when he was aged just 20, to the luxury Lanchester cars driven by King George VI and our present Queen Elizabeth he left a legacy of creative thought and engineering skill that remains second to none. Since opening in 2017, the Lanchester Interactive Archive has seen over 14000 visitors to the exhibition space where you can try out our augmented reality and serious games as well as experiencing a real Lanchester car built in Coventry in 1933.

Lanchester’s impact didn’t end when he died in 1946, last year student Osita Ugwueze created a simulation of Fred’s 1897 patent for a flying machine that was never built.  He was able to show that not only would the design have been able to fly, but that it would been more stable the Wright Brothers’ Flyer (flown six years later) and the advanced aerofoil would have produced more than 50% greater lift than the Wright design.

So today has been a chance celebrate a character who was instrumental in so many modern fields of aeronautical and automotive engineering and so much more.

For Coventry University students there is also an opportunity to take inspiration from his ideas for hybrid cars or the flight of birds that prompted his investigations into mechanical flight and possibly win a prize of £250! Simply visit the space or explore the online archive and come up with a piece of art that Fred’s life and work has inspired. Find out more on our competition page and enter today!

But most of all, Happy Birthday Fred! 150 years and still going strong!!