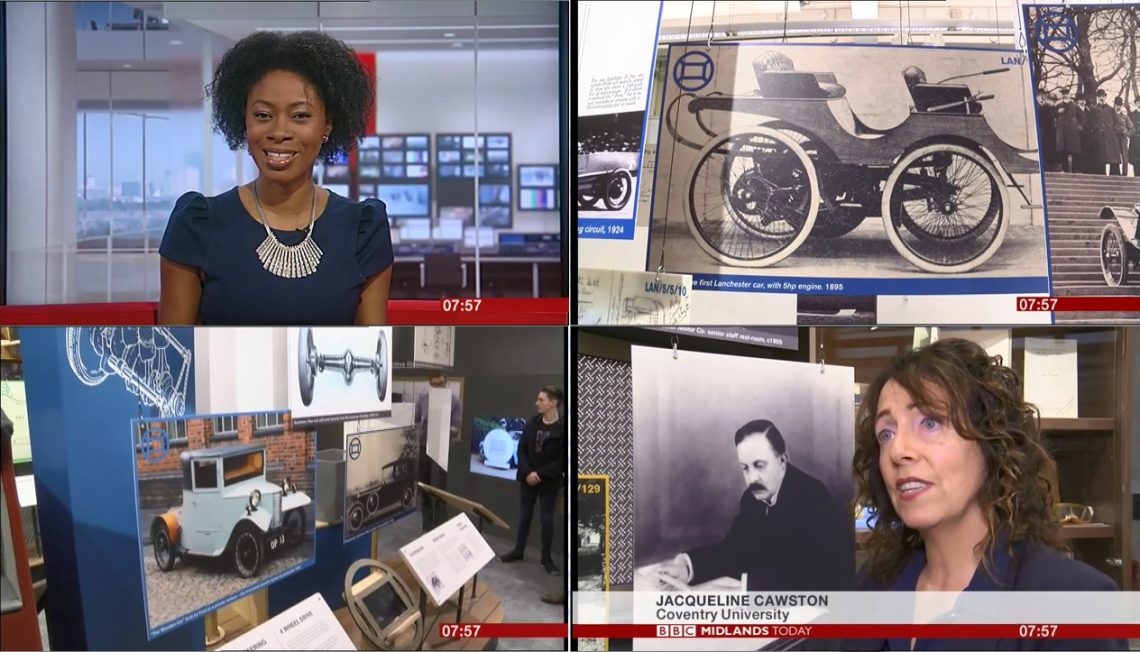 Look out for the Lanchester Interactive Archive making an appearance at 18:30 on the November 23rd edition of Midlands today on BBC1 in the West Midlands.

A frantic day of filming last week not only took reporter Kevin Reide around the space but out and about with Lanchester expert Chris Clark in his unique 1953 Lanchester Leda roadster.

The games and augmented reality that bring Frederick Lanchester’s engineering and inventions to life were demonstrated and the windows opened on this unique collection of notebooks, sketchbooks, patents, correspondence and photographs that have all been digitised as part of the Heritage Lottery funded project.

The broadcast also celebrates the success of MSc student Osita Ugwueze who recently won the John Barnes Trophy for his report on Lanchester’s 1897 flying machine patent (which you can look at in the online archive).

This prestigious award was presented to Osita by the Association of Aerospace Universities for his work in building a flight simulation model of a manned aerial machine that Fred Lanchester patented, but never built.

Using advanced computer software he was able to model the aircraft and prove that had Lanchester been able to build his machine, not only would it have flown, but it would have been more aerodynamically stable that the Wright Brothers’ ‘Flyer’, the world first plane, flown six years later in 1903. More work is still to be done, including wind tunnel models and perhaps even a full-size piloted version of this amazing machine, but it goes to show that there is still so much to be learned from this fantastic archive.

You can visit the Lanchester Interactive which is free and open seven days a week from 10am – 5pm Monday – Friday and 10am – 4pm Saturday and Sunday. We’re located in Coventry University’s Frederick Lanchester Library.

For more information about arranging free visits or workshops for your school or community group as part of our Outreach Programme email outreach@lanchesterinteractive.org. or tweet us on @lanchester_ia.