Frederick born on 23rd October, 1868 in Lewisham Road, Lewisham, near London. Fred was the fourth child of nine.

Fred started at the Hartley Institute, which is now part of Southampton University, at the age of fourteen.

Fred won a national scholarship to the Normal School of Science in South Kensington, London (later known as the Royal College of Science and now part of Imperial College). Fred left before his final exams with no formal qualifications

Fred started his first job, as a draughtsman in a Patent Office 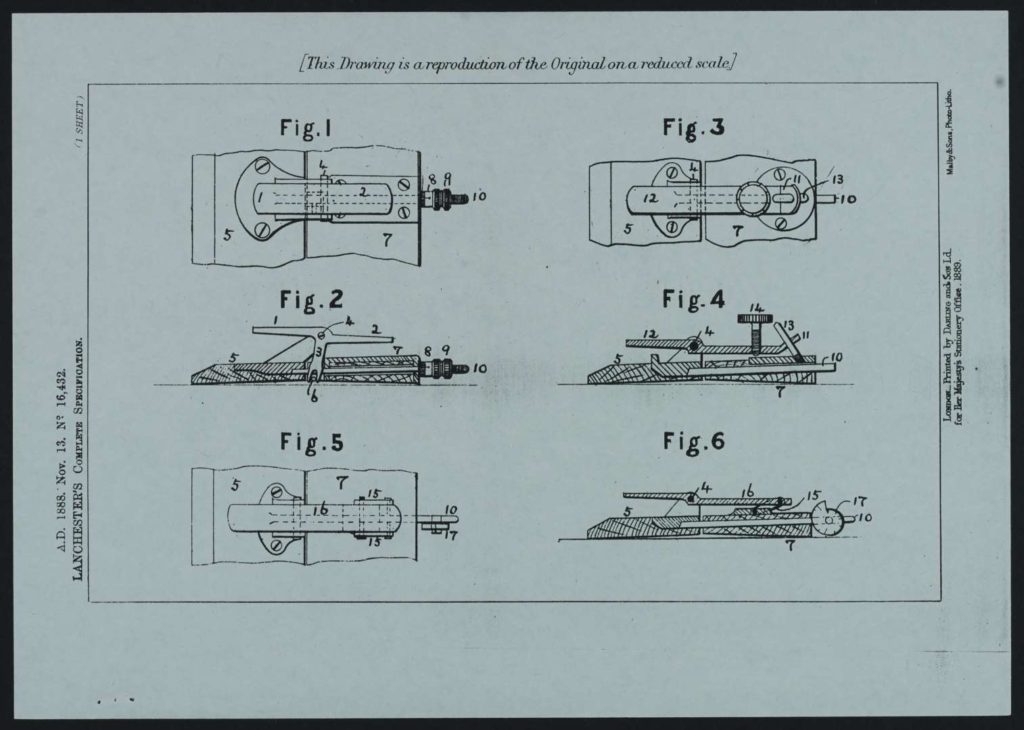 Fred has his 1st patented invention accepted, for an Isometrograph (an instrument to draw parallel lines); hundreds more to follow.

Fred moves to Birmingham to start as Assistant Works Manager at the Forward Gas Engine Company, Saltley, Birmingham. He is later joined at the firm by his brother George, who becomes an apprentice. Fred creates syndicate leading to Lanchester Engine Co. Fred applies for 7 patents. 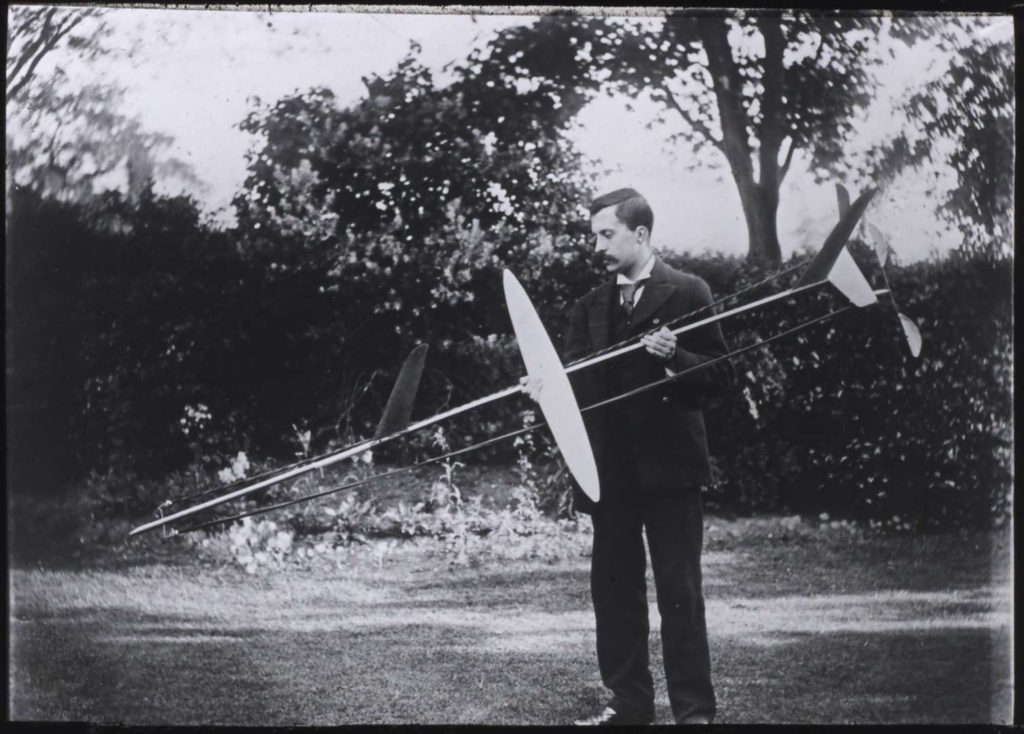 Fred became fascinated by gliders. He would launch models he built from the first floor window of his home to record and analyse their line of flight 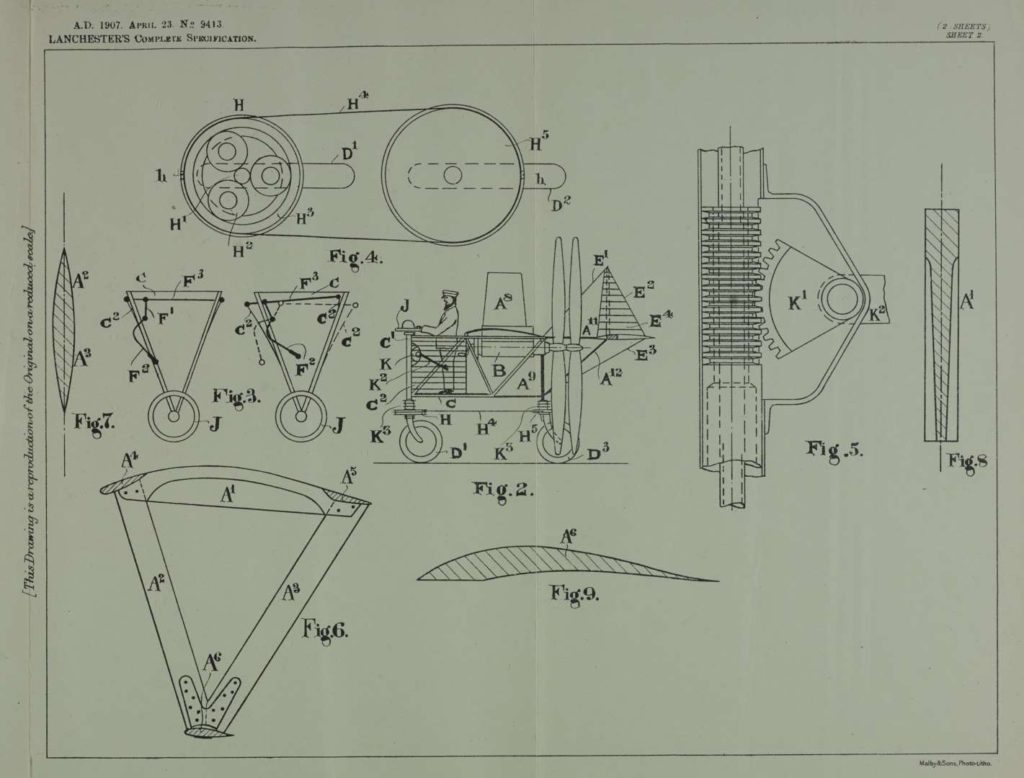 Fred’s work with the Forward Gas Engine Company took him to the USA. On his transatlantic voyage he observed birds flying and gliding, which fed and developed his theories on flight. 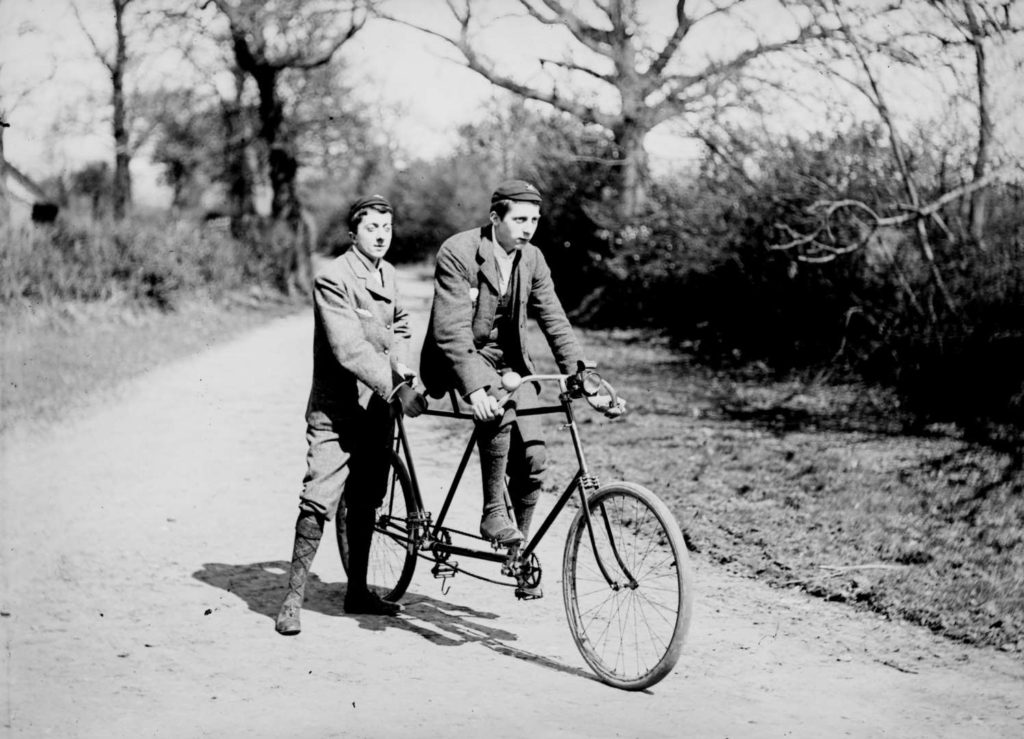 Fred resigns from the Forward Gas Engine Company to concentrate on his own work and is replaced by George (but retains the post of Designer & Technical Adviser). Fred begins developing motor vehicles. Fred, George and Frank start The Lanchester Brothers bicycle company, manufacturing bicycle parts. The business was not viable and closed in 1894. 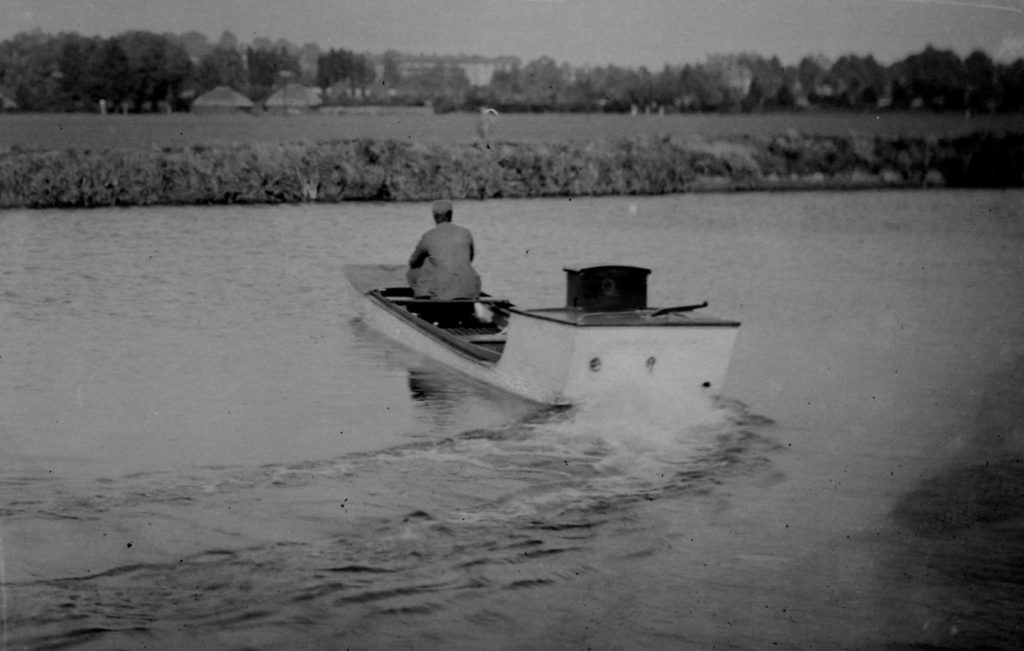 Fred designed & built the first all-British motor boat, which he piloted on the River Thames at Oxford

Fred works on the fundamentals of flight Fred gave his first paper – ‘The Soaring of Birds and possibilities of Mechanical Flight’, which recorded his early observations, experiments and theories on flight. 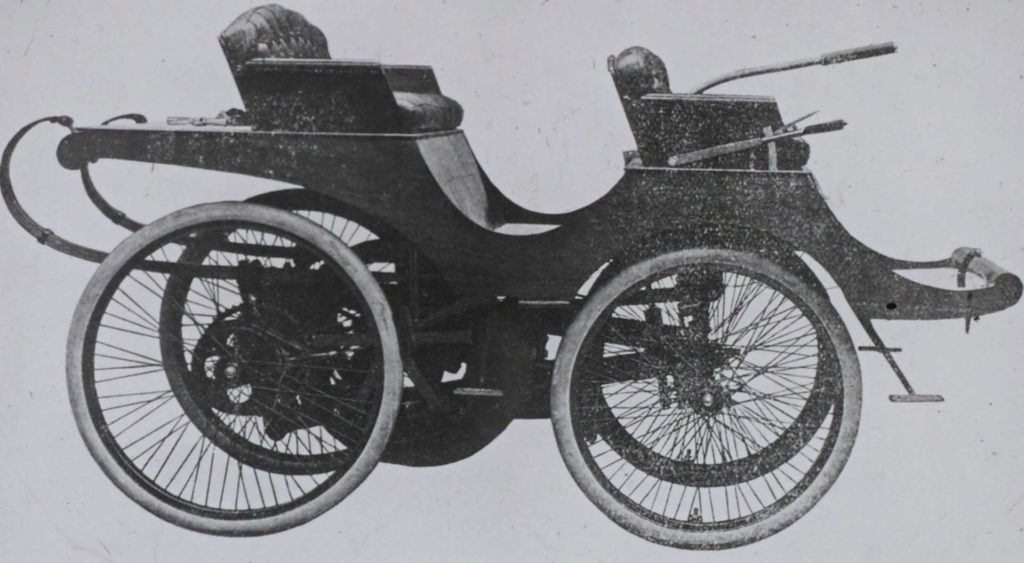 Frank joins his brothers at the Forward Gas Engine Co. Fred patents aspects connected to the invention of colour photgraphy. In December he drove the first all-British 4-wheel motor car on a public road in Taylor Street, Saltley, Birmingham

Road tested the Phaeton for the first time 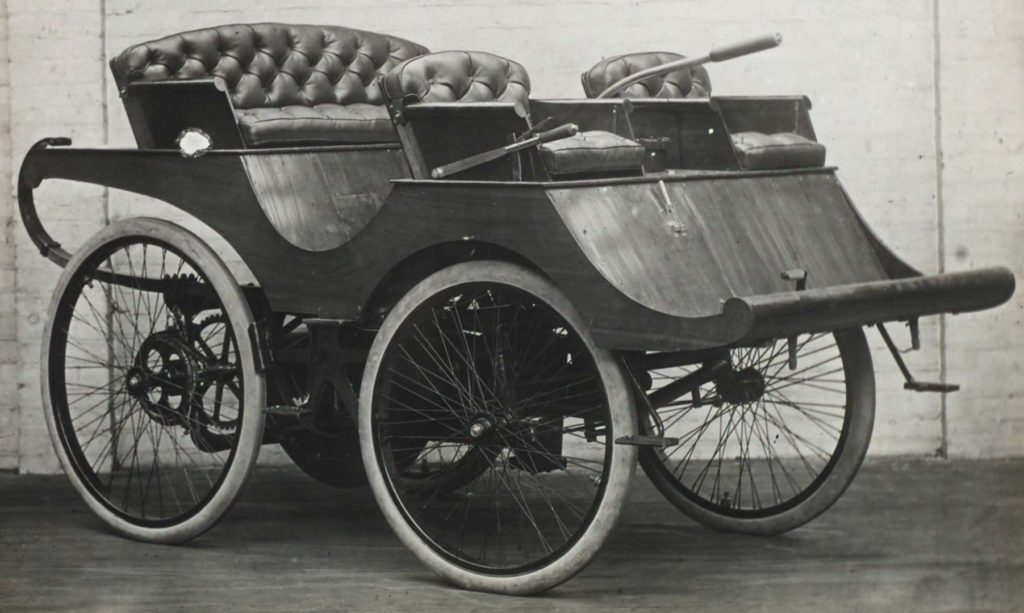 By end of the decade Fred has applied for patents on 111 inventions, including one for ‘rack & pinion’ steering in 1898. Fred’s 2nd boat launched. 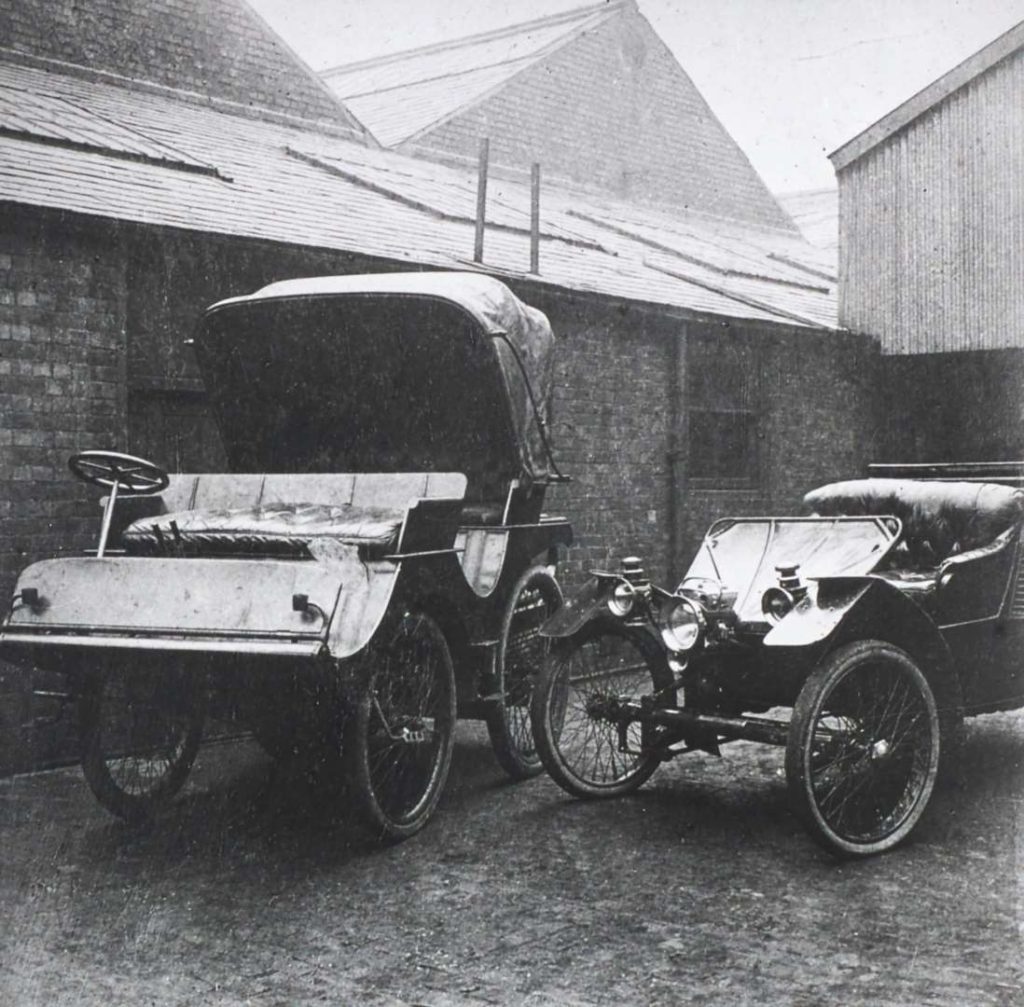 The first production Lanchester car was built: the 10hp.

Frank competed in the inaugural Phoenix Park Time Trials in Dublin. Fred abducts a policeman, who has damaged car in trying to challenge Fred about his speeding, and drives him from Birmingham to the Cotswolds. Fred invents the word ‘stream-line’. 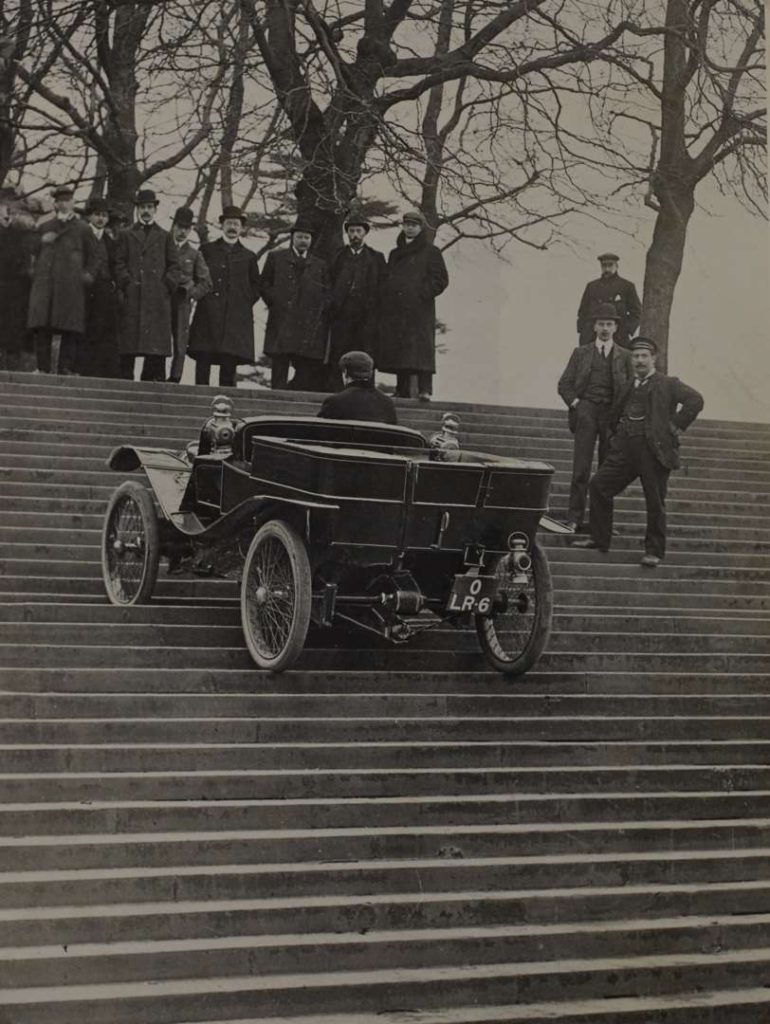 Lanchester test driver Archie Millership famously drove the 10hp car up the steps in front of the Crystal Palace, to demonstrate low gearing.

The Lanchester Engine Company filed for bankruptcy and was reformed as The Lanchester Motor Company. George then headed the company, Frank directed sales and Fred was the principal designer and engineer. 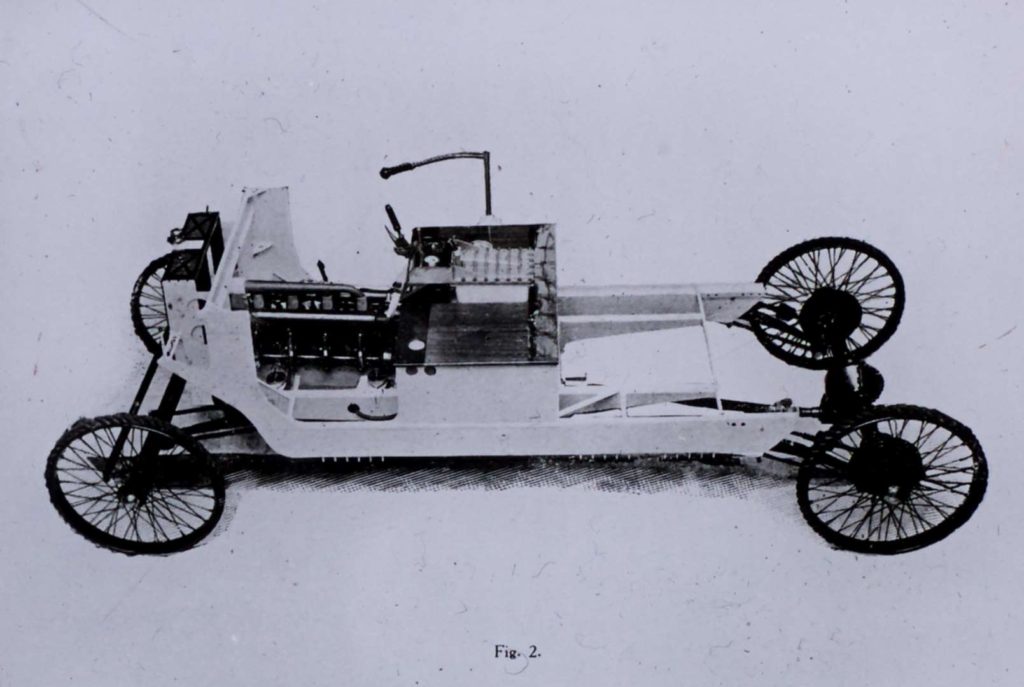 The Lanchester 10hp was the 1st car to drive up Shelsley Walsh Hill Climb in Worcestershire. 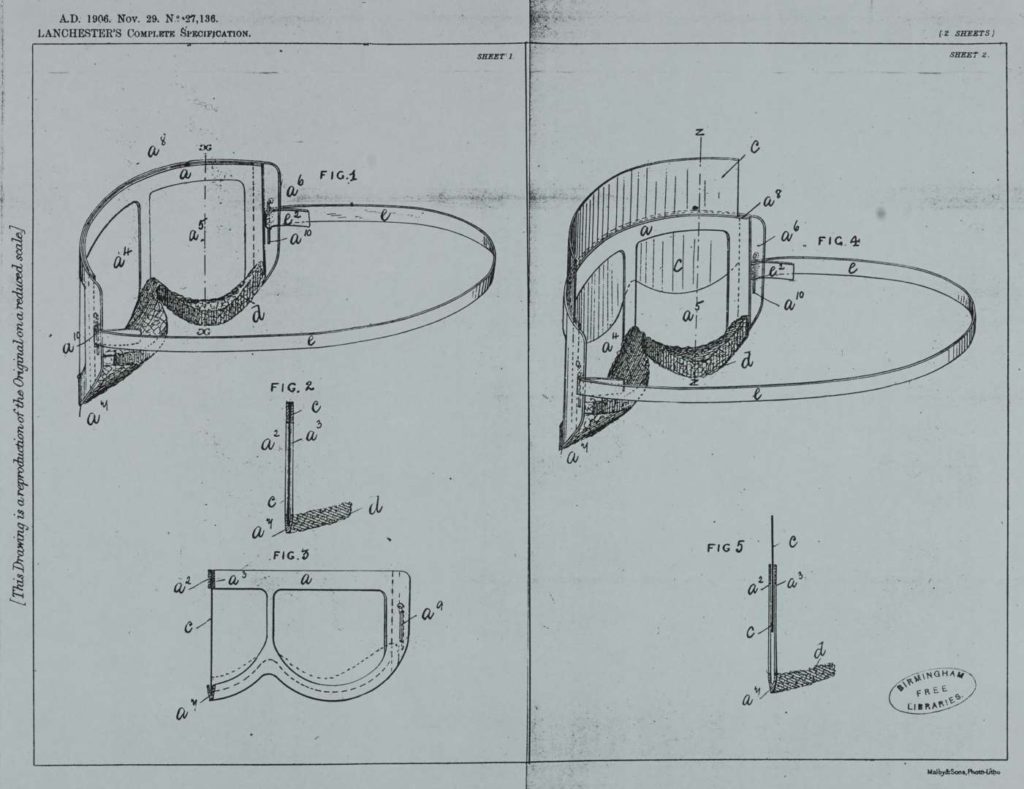 George patents his invention of driving goggles – the only remaining set are in Lanchester Collection.

Fred published his profound book ‘Aerodynamics’, which detailed his analyses and theories on flight.

Fred published ‘Aerodonetics’, his second book on flight, which together with ‘Aerodynamics’ became volumes 1 and 2 of ‘Aerial Flight’. Fred receives the Bronze Medal award for his paper at the Aeronautical Society.

Fred is appointed founder member of the British Government’s Advisory Committee for Aeronautics.

Fred became the President of the Institution of Automobile Engineers

Fred designs an aluminium-clad aircraft but it crashes on bumpy beach.. 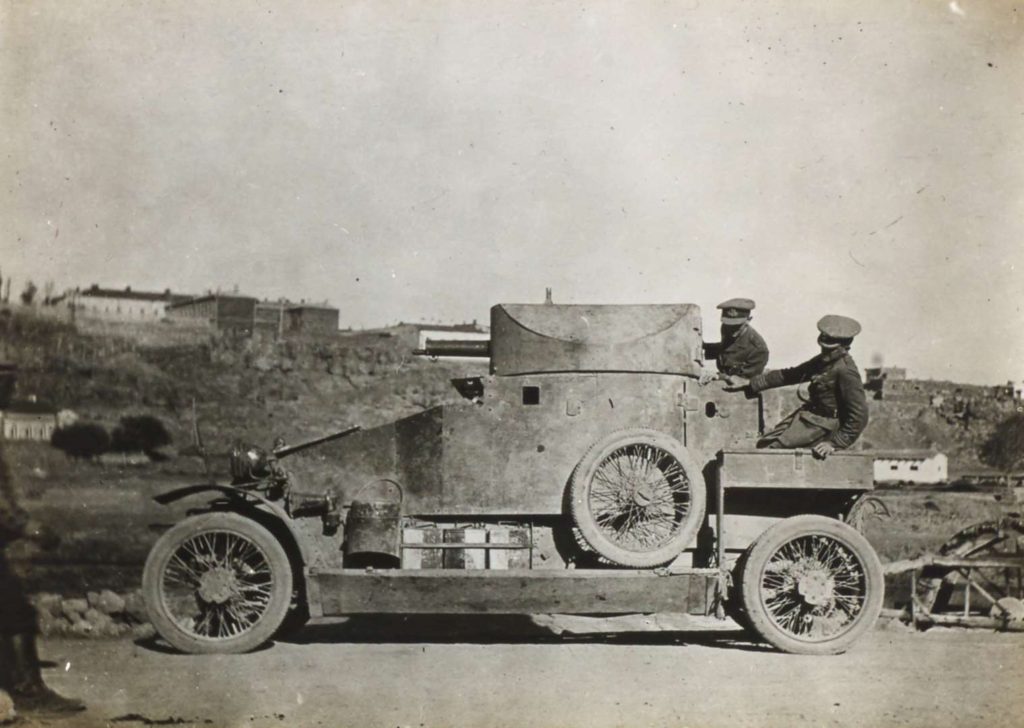 Lanchester Motor Company designed and manufactured armoured cars for the Ministry of Defence. They were sent to Belgium, used to rescue pilots after the battle of Ypres and later used on airfields in Britain. The company also produced staff cars, trucks and over 450 aero-engines for use in the war effort.

Fred became a member of the Air Inventions Committee of the Admiralty Board of Invention and Research.

Fred became the President of the Junior Institution of Engineers, now the Institute of Engineers and Technology

Fred published his controversial paper ‘Aircraft in Warfare; the dawn of the fourth arm’, which calculated the power of air attacks in war. It was used in many countries and later converted into a business strategy, and is still in use as such today.

Fred was granted fellowship of the Royal Aeronautical Society.

Fred was granted an Honorary Degree of Doctor of Laws by the University of Birmingham. It was his first formal qualification. Friends later referred to him as ‘Doctor Fred’. 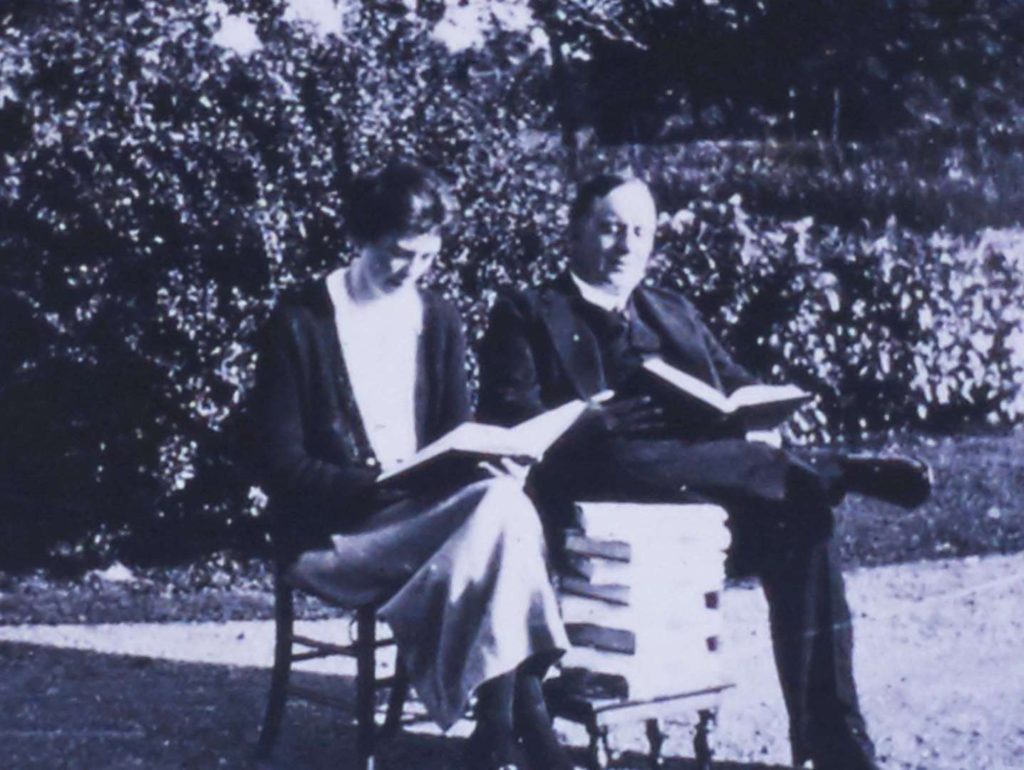 The Lanchester 40hp car was launched at the Motor Exhibition in London. 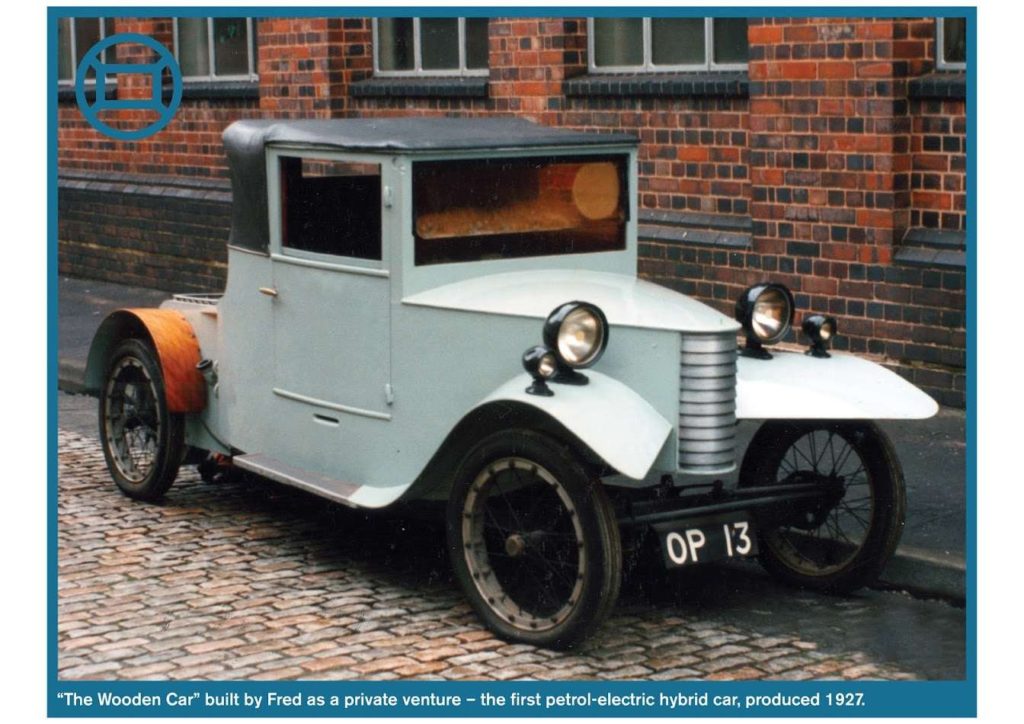 Fred designed and built a house (Dyott End) for himself and Dorothea in Moseley, Birmingham, where they lived for the rest of their lives.

The 40hp Lanchester car was bought and used by the Maharajas of Nawanagar, Newa, Rajkot and Kolapur, as well as being used to drive the Prince of Wales in 1923 and the Duke of York in 1925. It was acclaimed at the time as being ‘the most completely equipped and luxurious of carriages in the world’. 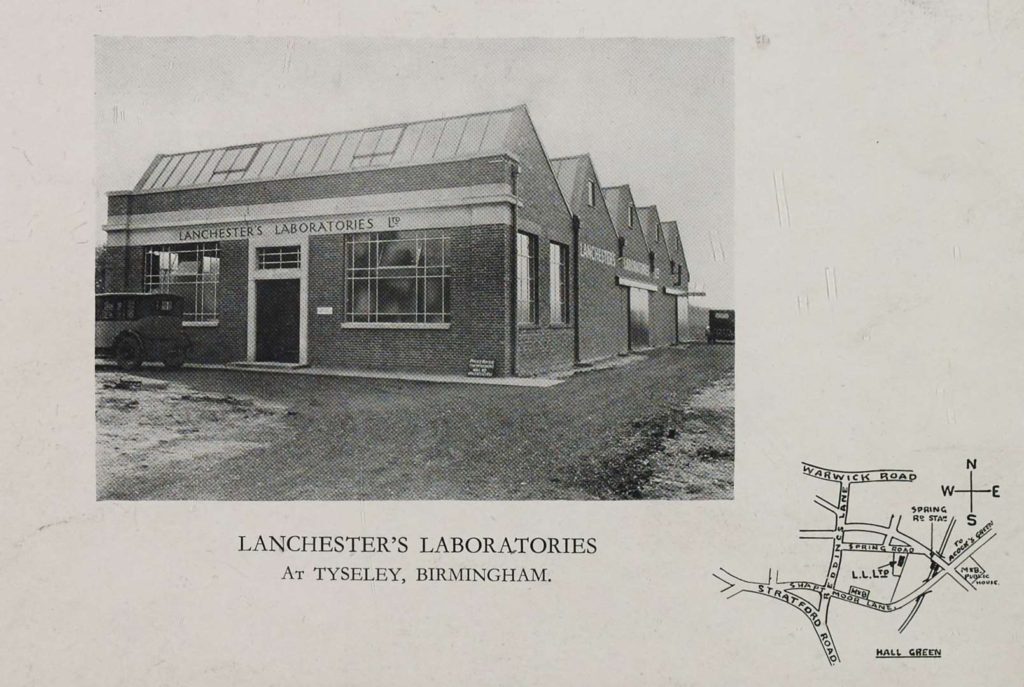 Fred formed a new venture called Lanchester Laboratories Ltd, in partnership with Daimler. The company later produced sound equipment including speakers and radios designed by Fred, which were available by mail order. The Lanchester Company was the 1st European company to use cellulose paint.

Fred resigns his other motor copany consultancies to work solely with Daimler.

Princess Elizabeth, the future Queen, made her first public appearance – in a Lanchester 40hp limousine, one of three bought by her father, the future King George VI.

Lanchester was the first company to build purpose-designed armoured cars, rather than using lorry chassis. These were later used in World War Two.

Fred leaves Daimler at Radford, Coventry after 20 years employment there.

The Wall Street Crash was the greatest stock market crash in the history of the USA and led to the Great Depression. Its catastrophic effects were felt in Britain; industry declined, unemployment and deprivation soared.

Fred began experiments on eyesight, working with Robert Lockhart, Professor of Anatomy at the University of Birmingham (later Aberdeen).

Lanchester Motor Company was bought out by Birmingham Small Arms Ltd and managed by another BSA firm Daimler to save it from liquidation. It relocates to Daimler factory in Radford, Coventry. George Lanchester stays Chief Engineer. Frank transfers to London Sales Department.

Fred was diagnosed with Parkinson’s disease, a progessive neurological condition that effects movement.

The Supermarine Spitfire was launched, a British single-seat fighter aircraft used by the Royal Air Force during the Second World War. The aircraft included features similar to earlier patented inventions by Fred Lanchester, including a semi-elliptical wing shape.

Fred revisited his earlier theories on flight and published revised papers on friction in aeronautics.

Outbreak of the Second World War.

Fred was appointed as a consultant to the Society of British Aircraft Constructors.

George designed and manufactured the Lanchester Sub-Machine Gun; used by British and other navies.

Fred died on 8 March following 2 strokes. His ashes were buried with his parents’ in West Sussex.

HM the Queen orders a Lanchester 14hp saloon for her own use.