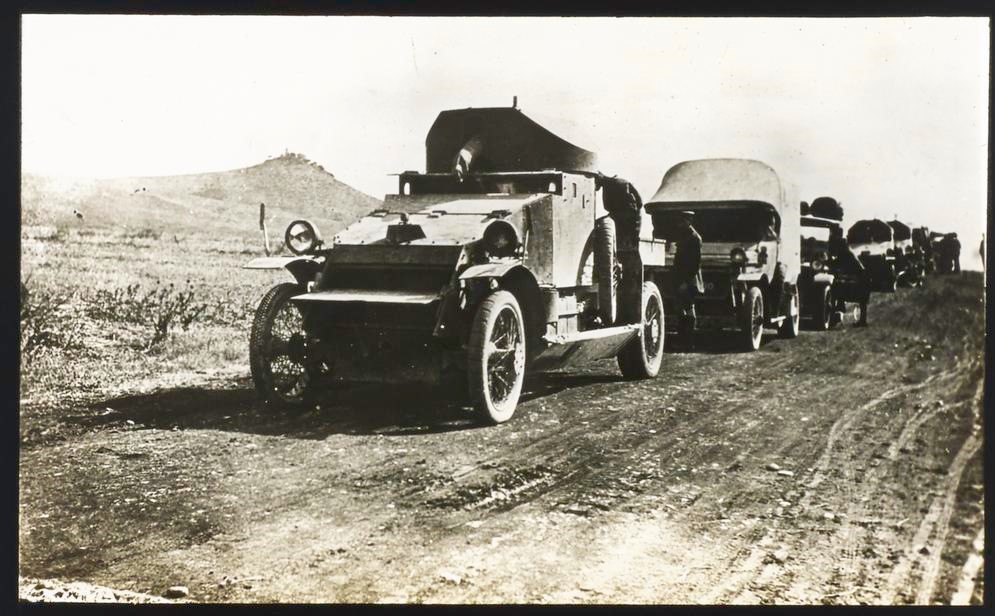 The First World War is generally considered to have been the first truly ‘modern’ conflict. By the time the armistice had been signed the major armies were making full, devastating use of readily available 20th century technology like wireless communication, telephones and aircraft. It was also the first conflict when armoured vehicles played a major part with the deployment of early tanks and armoured cars on the front line. Daimler and Rolls-Royce were car manufacturers that produced armoured vehicles for the British army, as was the Lanchester Motor Company. Prior to World War One some early experiments around armoured vehicles took place. In 1899 the British Army ordered a prototype for what would become the first ever armoured car. The Simms Motor War Car was based on a chassis built by Daimler in Coventry and assembled in Barrow by Vickers, Sons & Maxim. The prototype was delivered in 1902 and displayed at the Crystal Palace Motor Show in 1902, the same show where Archie Millerchip drove a Lanchester up the steps of Crystal Palace. A Lanchester Armoured Car in convoy

It wasn’t until the Great War that armoured cars featured prominently in battle. Yet the British government initially instructed British car companies to produce ammunition for the war effort. The Lanchester Motor Company was tasked with producing shrapnel shells, eventually producing 1,200 before the government switched the order to naval gun shells.

It was quickly realised that the arms produced by the Lanchester Motor Company and others were incompatible with the reality of the Western Front which had reached stalemate by the end of 1914. This was where Frank Lanchester stepped in and used his contacts in business and politics to persuade the Government that the Lanchester Motor Company would be better suited to building motor vehicles for use on the front line. His approach paid off and he won a contract for the company to build vehicles for the war based around the 25 h.p. and 38 h.p. design, including armoured vehicles as well as ambulances and staff cars. The prototype for the Lanchester armoured car was produced by December 1914 with the initial order of six cars sent to Belgium in 1915 under the command of Oliver Locker-Lampson who formed – and paid for the formation from his own money – the Royal Naval Air Service’s Armoured Car Division. The cars seem to have had mixed success on the Western Front and the vehicles were used mainly for rescuing downed pilots behind enemy lines after the fallback to Ypres in 1914. After this the reality of the static trench warfare meant there wasn’t much use for them.

However the Royal Naval Air Service (R.N.A.S.) -which merged with the Army’s Royal Flying Corps to become the Royal Air Force in 1918 – saw the potential of the armoured vehicles and placed an order for 36 cars. These were dispatched to Russia at the end of 1915 under the command of Locker-Lampson as the Armoured Car Expeditionary Force. Unlike the French and Belgian frontier the war on the Eastern Front was more fluid and trench warfare was not a prominent feature due to the length of the frontline, stretching almost 1,000 miles from the Baltic in the north to the Black Sea in the south. temperatures reaching -42°. It has been pointed out that the tyres on the Lanchester cars lasted longer than those used by the Rolls Royce equivalents because of the better suspension systems used. The ultimate fate of these vehicles, however, was decided by the October Revolution in 1917 and the eventual withdrawal of Russia from the war. Locker-Lampson dispatched a highly regarded account of the revolution and chaos taking place before his unit – freely available at the National Archives – and the unit was forced to leave after the revolution.

Only seven Lanchester Armoured Cars survived by this date and they were lost. Three cars had remained in Britain but they were used to provide publicity for War Bonds and, it is thought, were eventually scrapped. No original Lanchester Armoured Cars survive. However as part of the celebrations surrounding the centenary of World War One a replica car will be on display at the Daimler and Lanchester Owne’s Club stand at the NEC Classic Car show this year.

The Lanchester Motor Company would go on to continue producing armoured cars and vehicles throughout the 1920s and into the 1930s with them seeing action in the Far East in the Second World War. These models were assembled in Coventry and were a plot point in the BBC’s Peaky Blinders. The First World War was undoubtedly the conflict which changed military technology and tactics forever. As well as the advent of air power, armoured cars and tanks were now a key component of a modern military force used to devastating effect throughout the 20th century. The Lanchester Armoured Car from the 1920s – this image is a target for our AR App which is free to download.